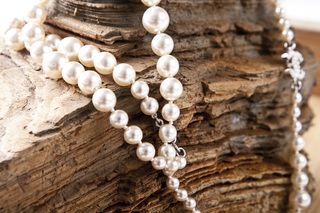 “What is a pearl?” A pearl is something relatively hard and usually silvery-white that is either round or of irregular shape. Its nucleus is an ‘intruder’, which the pearl-producing mollusc has first coated with a pearl sac around which it has then deposited layers of microscopic small crystals of calcium carbonate called ‘nacre’ in order to isolate the foreign object called ‘irritant’. Between the layers that make up the pearl are layers of the organic compound conchiolin that glues them together and at the same time separates them. The process of producing these nacre layers is never ending what means that the older the pearl is, the larger is the amount of its layers and, subsequently, the bigger it is. This is the answer to the question.

“And that is all?” you may now ask. Well, basically, yes but there is, of course, much more to the topic ‘pearl’. Keep on reading and you will know. Let’s take a peek into the history of pearls and pearl business and go back to the beginning.

It was probably 500 BC (perhaps earlier) that people focused more on the contents than the wrapping and started to appreciate the beauty of pearls more than the mother-of-pearl of their producers’ shells. Consequently, they placed the best of the pearls at one level with ‘gemstones’ and attached high value to them in immaterial terms (power and beauty) and material terms (wealth).

Pearls are also called ‘Gems of the sea’ but unlike any other gem, a pearl is the product of a living being. That is, pearls are the only ‘gems’ of organic origin, which is exactly how gemmologists classify pearls in general: as ‘coloured gems of organic origin’. And pearls are the only ‘gems’ that require no cutting or polishing – just cleaning – before they display their full beauty.

Back then pearls only existed in the form of natural also called wild pearls. They were therefore very rare and being a symbol of power, wealth and beauty much sought after by royalties and non-royalties who could afford and were willing to pay astronomical prices for them. In other words, the demand for pearls – either singly, as so-called collectors’ item or as part of jewellery – was very high and the supply very low what made a special category of pearls a highly priced luxury article and the trade with these pearls an extremely profitable business. Fuelled by three of mankind’s strongest motives – to be wealthy, powerful and beautiful – the hunt for pearls by sellers and buyers alike had begun.

ABOUT US
Living the fitness lifestyle is the most rewarding part of my life! We have to get it in our minds that living fit is more than a gym workout or a series of well planned meals, it truly is a lifestyle.
Contact us: contact@yoursite.com
FOLLOW US
© Copyright 2017 - Newspaper WordPress Theme by TagDiv